THE 2020 PRESIDENTIAL ELECTION IS THE LAST, BEST CHANCE FOR THE U.S. TO CONFRONT THE CLIMATE CRISIS.

Climate change is rapidly escalating into the single greatest threat we face, and the next president must be committed to ambitious and immediate action on climate that builds a more just and sustainable society. 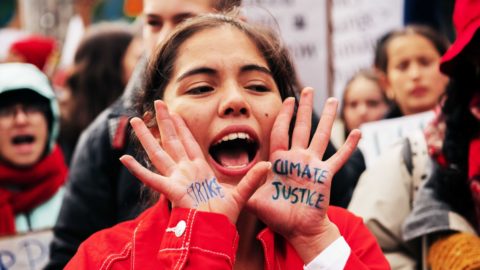 Study: Biden can unite progressives and swing voters with a focus on climate

The environment is the biggest driver of doubts about Trump among his wavering supporters. What Biden can do to woo Sanders' climate voters

If Joe Biden wants Bernie Sanders’ climate change activist supporters to jump on board his campaign, he might have his work cut out for him. [subscription required] Baumann said young voters can be moved if he conveys the need for fundamental change, with policies to back it up like anti-corruption measures, getting money out of politics and standing up to oil companies and Wall Street banks. He said that climate change is the No. 1 issue for many young people and that … END_OF_DOCUMENT_TOKEN_TO_BE_REPLACED Joseph R. Biden Jr. keeps winning, and winning voters who say they care about climate change. But some of the most ardent climate activists still are not with him. Next week, Georgians go to the polls to vote in the primaries; many people have already voted early. At this point, there are two major candidates still in the running in the Democratic presidential race. Both Vice President Joe Biden and U.S. Sen. Bernie Sanders agree that climate change is an urgent issue. In the 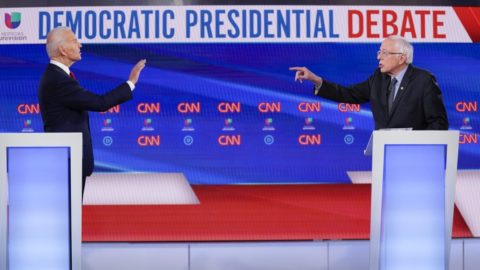 Who’s your climate champion? Sanders and Biden vied for the title at Sunday’s debate

From coronavirus to climate change, the candidates showed how they’d govern in the midst of crisis. We have the boldest plan to address the climate crisis and the courage to take on the fossil fuel industry. #DemDebate https://t.co/56Er0njNYx

Bernie Sanders, Climate
Joe Biden
3/15/20
Joe Biden (Text Join to 30330)
@JoeBiden
Twitter
We have to treat climate change like the existential threat it is. As president, I will: – End subsidies for fossil fuel corporations – Ban new drilling on federal lands & waters – Hold oil executives accountable – Rally the world to raise the commitments of the Paris Agreement

Joe Biden, Climate, International, Public Lands
Joe Biden
3/15/20
Joe Biden (Text Join to 30330)
@JoeBiden
Twitter
There is no denying the existential threat of climate change — and time is running out to address it. We have to take unprecedented action here at home and rally the world to tackle this crisis head on. Read the full plan: https://t.co/FbsOsyQkIo If Biden and Sanders had a climate debate, it would sound like this.

As Sen. Bernie Sanders (I-Vt.) stays in the race for the Democratic nomination, he’s identified climate change as a top issue for young voters and argued that his rival, former vice president Joe Biden, is not willing to take the dramatic steps needed to save the planet.